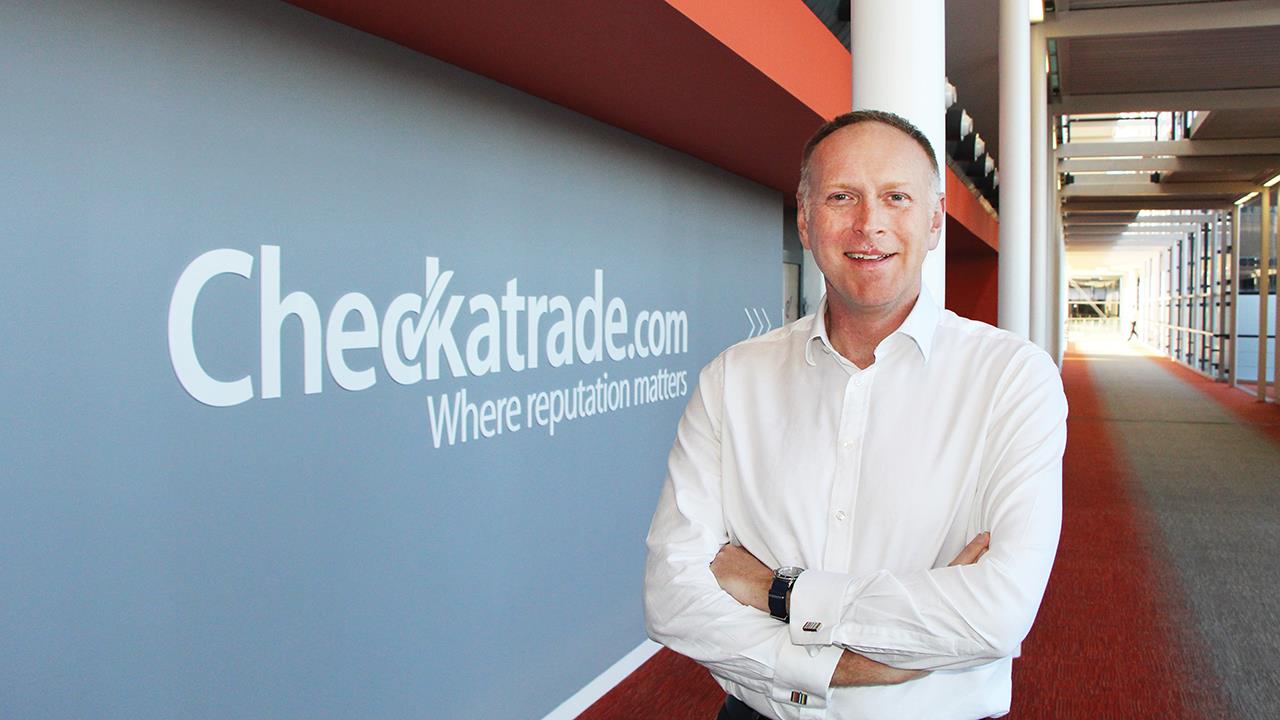 HVP Editor Joe Dart speaks to Checkatrade Chief Executive Mike Fairman about recent and upcoming changes to the business and the likely impact they will have on members.

Working in the trade means that you’ve likely come across Checkatrade before. You may already be a customer, have worked with them in the past, or perhaps even considering signing up for it now.

The last few years have seen a number of significant changes to the online directory service, mainly thanks to the business being bought out by home repairs giant Homeserve in 2017. The pace of change to business operations has been swift since then, but not entirely without controversy.

This period of change has also seen a change in personnel at the top of the business, with Mike Fairman joining the business from mobile network GiffGaff as its new Chief Executive in late 2018. With Mike’s feet now firmly under the table at Checkatrade, we spoke to him about what’s changed in his first year in charge, plus plans in the pipeline for the business moving forward.

A big focus for Checkatrade, according to Mike, is making more consumers aware of the business. He explained: “We’ve upped the investment in growing the consumer awareness of our brand. Last year, we doubled the advertising we put out there, and we’ve doubled it again this year.”

Shortly after Homeserve took over the business, membership prices went up, causing consternation among some members of the platform. But Mike is keen to emphasise that “every single penny” from the new prices has gone into advertising.

It appears to be working too, with Checkatrade keeping a close eye on how it stacks up against competitors in the public eye. Spontaneous awareness of the brand with the general public is now just shy of 50%, which Mike says is nearly four times more than its nearest competitor.

He added: “Year-on-year, the number of calls our platform is delivering to trades has gone up nearly 50%.”

Investment in the business is an absolute necessity to keep it delivering for tradespeople and consumers alike, explained Mike. “At the end of the day, we can’t go out and continue to grow as a business and get more trades on the platform without more people visiting the website.”

Saying that, however, Mike confirmed there are currently no plans to raise its prices going forward. Core prices haven’t risen in the past year but, having made the realisation that every trade is different, the business is instead attempting to price the service more intelligently.

He said: “What we’ve done is introduce this thing called trade category pricing, where we basically have looked at the value of what we deliver as a business, and also the margins and the size of jobs that different trades have, and we’ve bunched those 72 trade categories into different pricing bands. Our prices are now ranging between £50-120 a month, depending on what trade category you’re in.”

Mike says that the main focus for Checkatrade is to provide choice for tradespeople, so the business has also introduced new pricing options to encourage take-up of the platform.

“In the past we’ve been focused on 12 month contracts, but we wanted to introduce ways in which the trades could try it out, with less of a commitment to the business.

“If you pay a premium (£20 a month), you’re not hooked into the 12-month contract, you’re on a 30-day rolling contract, and that’s proved to be really popular with the trades. And that’s something we’ve now rolled out to half the country.”

In 2018, Checkatrade came under fire from a number of tradespeople over an initiative called ‘Managed Contacts’ (now Secure Contacts), a feature which introduced dedicated phone numbers and email addresses for Checkatrade members, which were displayed in place of trades’ contact details, but still diverted directly to them.

“We could have introduced what was called Managed Contacts when we first did it much much better,” Mike admitted.

“One of the first things I did when I joined was try to understand what the negativity was about. It actually turned out that one of the biggest concerns that trades had was that when they got listed on Checkatrade, from the day they got listed, they got a load of sales calls from people trying to sell them stuff. And, at the same time, I was hearing feedback about Managed Contacts and I thought ‘hang on, one thing can solve the other here’.”

Mike explains that it is now known as Secure Contacts because of a decision to include a spam filter to help reduce the number of spam calls and emails to tradespeople, meaning the inbound enquiries the trades get are much more likely to be from genuine customers.
Secure Contacts also allows Checkatrade to more closely monitor the number of leads it is providing tradespeople, according to Mike.

He added: “We play a Checkatrade jingle before every call that goes through to a trade, so the trade knows that we’ve generated a call. But also, on the flipside of it, it also means that if we’re not delivering the contacts that trades expect, then we know as well, which means we can do something about it.”

Much of the initial blacklash surrounding its introduction appears to have died down, with the rollout of Secure Contacts completed in October of last year. Although some tradespeople cancelled their membership, of those that remained on the platform, only 2% chose to opt-out. But there’s still more than can be done to make tradespeople understand the value of it.

Mike said: “We’re looking forward to using that information in a better way, and actually making it more available for trades to see as well.”

Checkatrade has been keen to get its members more involved in influencing the business’ decision making process in recent times, and has introduced a members committee of 12 tradespeople from around the country, who are nominated by Checkatrade members in those areas.

Mike explained: “We meet up quarterly, we give the members an update of how business is going, and talk about what’s coming up. It’s a fantastic way for them to feed back about what trades think about Checkatrade and what they think we should do to improve things.”

In fact, the committee has already helped to shape what became the company’s trade category pricing policy.

“The strongest bit of feedback I got to the first meeting was the fact our pricing was inconsistent, they couldn’t figure out why trades of the same type and the same area were being charged different amounts.

“That was something that led to us implementing trade category pricing, so there’s very concrete evidence that we’re listening to what trades are telling us,” said Mike.

A new online community for members has also been introduced to supplement the members board, and Mike says that, going forward, they both will likely dovetail together more closely.

Another big focus for Checkatrade is improving both the customer and tradesperson’s experience across the platform, says Mike.

One such change was a new consumer front-end for the website just before Christmas, plus the business has made a number of wholesale changes to its background systems to make it more efficient and responsive, which Mike says he hopes will start to show through this year to the trades and consumers.

“Little things make a big difference,” said Mike. “[For customers] on a mobile phone, instead of having the number displayed, [we implemented] a little ‘click to call’ icon, which made it easy for people on their mobile to contact you. We changed that and saw a big increase in the number of calls coming through.”

Checkatrade is also launching an app for tradespeople on the platform, which Mike says should be available by February. It will provide a number of advantages over Checkatrade’s existing online platform: “The Secure Contacts info is new, we’ve brought together all the information that allows the trade to see when they’re being contacted, so profile page views, the number of callback requests they’ve got, and the number of calls, texts, and emails that have been sent through,” said Mike.

“Over half of the access that the trades make to our website is via mobile, just having an app makes it much more convenient as you don’t have to remember your username and password every time you go in, and you’ve got to check it when you’re out and about.”

Also incorporated in the app are work alerts from Checkatrade Now, a new service where the fastest local tradesperson to respond can take on emergency jobs for customers who need work done immediately.

Checkatrade Now is currently being trialled in Hampshire and it will start to be rolled out to other areas in London and the South East from this month.

For those already on the platform, or those considering joining, Mike had three key pieces of advice for tradespeople looking to make the most out of their Checkatrade membership.

The first was the need to have a professional looking profile page, which he said was the tradesperson’s shop window: “There are a lot of opportunities on the profile page to add your logo, add pictures. Make sure you do that and, if you don’t have a good looking profile page compared to your competitors, then you’re going to get fewer calls.”

He also recommended offering both a mobile and landline number to your profile as evidence had shown that those tradespeople with both were likely to attract more calls.

The second was to make sure you continually ask your customers for feedback. He explained: “There is a link between how much feedback you’ve got and how recent it is to how far up the search rankings you come.”

Although the onus is currently on tradespeople to get customers to fill in feedback, Mike says Checkatrade is looking at ways it can prompt consumers to leave feedback to support in this endeavour.

The final recommendation is that tradespeople should specify the geographical area they want to work in.

Home or office location is key factor in the site’s search algorithm, so if your home area isn’t where you’re typically getting work or want to get work, Checkatrade can help accommodate this.

Mike concluded: “Any trade, if they want to optimise where they get work, it’s a conversation they should have with one of our membership advisers.

BUSINESS CHECKATRADE HEATING MONEY PLUMBING TRADESPEOPLE
Tweets by HVP
Make sure you’re on top of changes in the industry, and sign up for free to receive your monthly copy of HVP and our weekly email newsletter
SUBSCRIBE TO NEWSLETTER
SUBSCRIBE TO MAGAZINE