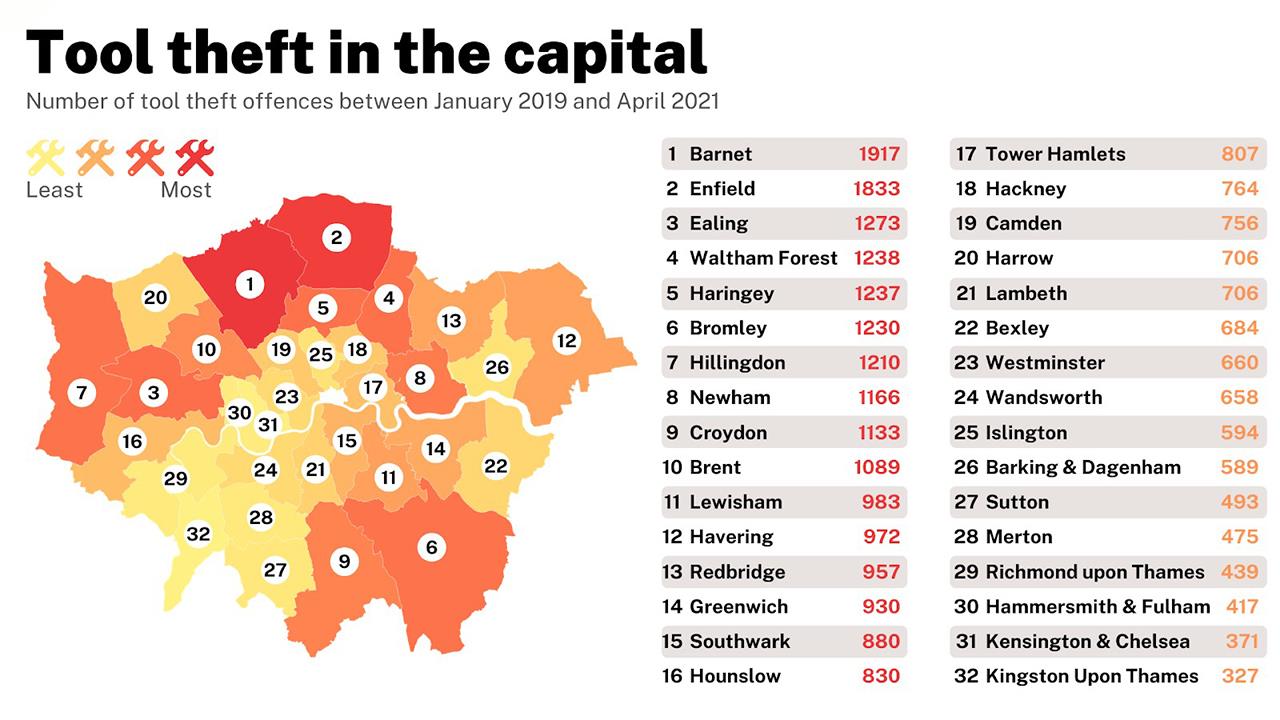 Tool theft has cost tradespeople in London more than £38 million in the last two years, and £17.5 million in 2020 alone, Metropolitan Police data has revealed.

As the construction and trades industries attempt to recover from lockdown bans on non-essential work, new data shows there were 28,338 tool thefts reported across London from 2019 up to May 2021.

Barnet, Enfield, Ealing, Waltham Forest, and Haringey are the five boroughs where figures were highest, with thefts in Barnet (1,917) accounting for nearly 15% of the total.

The findings, collated by London plant hire specialist Herts Tools, come from a freedom of information request to the Metropolitan Police. The data reveals the impact of tool theft on livelihoods, the cost of the crime and the most affected areas in London.

Only 1% of those powered hand tools were recovered, underlining the need to prevent theft in the first place. Building materials were retrieved more than other items, but even they were recovered just 4% of the time.

Stefano Lobban, Director at Herts Tools, said: “It’s been a tough couple of years for tradesmen and people working in construction, with COVID-19 really restricting their ability to work. The last thing they need is their tools being stolen, but this new data shows us just how common that reality is, particularly in London.

“Unfortunately, thieves are often attracted to high-price items like powered hand tools. Of course, when these items are stolen, it’s even harder for tradesmen to replace them due to the high cost.

“We just hope people take these new figures as a warning and make sure they’re vigilant.”

CRIME LONDON TOOL THEFT TOOLS
Tweets by HVP
Make sure you’re on top of changes in the industry, and sign up for free to receive your monthly copy of HVP and our weekly email newsletter
SUBSCRIBE TO NEWSLETTER
SUBSCRIBE TO MAGAZINE